CONSERVATION ORGANISATIONS THAT I AM HAPPY TO SUPPORT 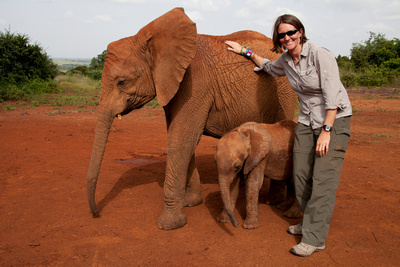 Sheldrick Wildlife Trust As one of Africa’s oldest wildlife charities and a leading conservation organisation, the Sheldrick Wildlife Trust (SWT) embraces all measures that complement the conservation, preservation and protection of wildlife. Most well known for its successful elephant orphan rescue and rehabilitation program, SWT is also involved with aerial surveillance, anti poaching, community outreach and a veterinary unit.

I have adopted two elephants, "Shukuru" and "Kithaka" through the SWT's orphans programme and enjoyed meeting them on my visit to the Nairobi Orphanage in June 2012, following a Kilimanjaro climb to raise funds.

Saving the Survivors Set up by Dr Johan Marais in 2012 to treat endangered wild animals that had fallen victim to poaching or traumatic incidents.  Whilst they attend to the need of any injured animals, most of their efforts have been directed at rhinos, due to the vicious attacks that many of them have fallen victim to.  Due to the escalation in poaching and snaring incidents, the number of victims is rapidly increasing. Fortunately many injured animals have been given a second chance after undergoing various interventions and surgical procedures performed by their team. Most of these animals are treated in their natural habitat as transporting injured wildlife increases the risk and trauma they experience.

I first became aware of Saving the Survivors when I read about the terrible plight of "Thandi", a rhino from Kariega Game Reserve who was brutally poached along with two others and left for dead. She was rescued and rehabilitated by Dr William Fowlds and STS over many years and has gone on to have three healthy calves, Thembi, Colin and Mthetho.